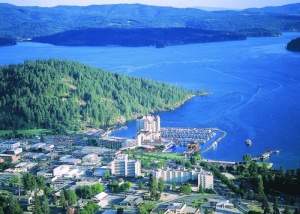 Coeur d’Alene, with a population of about 50,000 is nestled on the shore of Lake Coeur d’Alene.  To the West lies the growing metropolis of Spokane, Washington, to the North, East and South lies a vast wilderness area comprised mainly of a network of the largest national forests in the U.S.    The city is named after a local tribe of native americans that originally inhabited the region.  The natives were named “Coeur d’Alene” by French fur traders on expedition through the region in the late 1700’s.  Coeur d’Alene means “Heart of the Awl,” or “Sharp Hearted” as the French recognized the natives as being difficult trading partners.  The native people referred to themselves as Schitsu’umsh, a Salish phrase meaning “The Discovered People.”

Coeur d’Alene, the city began to grow around a bustling Mining and Timber Industry, along with the construction of Fort Sherman military base in 1878.  Today, the main draw to Coeur d’Alene is Tourism as the area boast unlimited opportunities for nature enthusiasts and adventure travelers.  Lake Coeur d’Alene, Hayden Lake and Lake Pend O’reilles are great playgrounds for boaters, kayakers, fishermen, sailers, birders, photographers and divers.  Area rivers are ideal for fly fishing and rafters.  Hiking and Backcountry trails abound offering unlimited pathways into the surrounding mountains.  The numerous state parks and wilderness areas offer superior camping, both on and off the grid. Coeur d’Alene offers four seasons.   The area has many top-rated golf courses with a rather long season, including on of the only “floating greens” in the U.S.  During winter, the surrounding area is an up-and-coming ski destination with 5 sizeable ski resorts within an hour’s drive, the largest being Schweitzer Resort in nearby Sandpoint.  The nordic ski trail system at Fourth of July Pass is one of the nicest groomed mountain trail systems in all of North Idaho. Aside from the plethora of outdoor activities, the town itself has a growing popular culture with many new trendy shops and highly acclaimed restaurants.   The area has also been recognized as a top 10 retirement community. Being only 4 hours from Seattle and a hop-skip-and-a-jump from Western Montana, Coeur d’Alene’s location is one of it’s largest assets.  We love living here and seldom run out of new adventure opportunities.  We hope this collection of our favorite things to do, see and experience helps you plan your trip to Coeur d’Alene and North Idaho.

“Wherever you go, go with all your heart.”