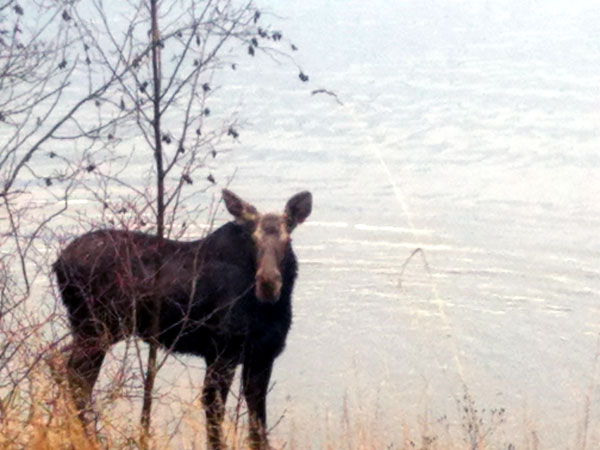 The other day Jason and I were having breakfast by Lake Coeur d’Alene, as we often do.  Jason spotted something off in the distance swimming in the bay.  Because we’re used to only seeing birds in that area, we initially thought it was probably a bird.  As it got closer, we saw that it was much bigger than that.  To our surprise, it was a MOOSE!  We couldn’t believe it.  It’s not that moose sightings are rare in this area, but we just never expected to see a moose swimming across the bay!  Also, because she was coming from the direction of the highway, we think she crossed that first which is a huge feat in itself.  The beautiful young cow was a great swimmer and crossed the bay quickly.  I reached for the camera but oh, wouldn’t you know… I didn’t have it with!  Ahhhhhh!!!  Complete and utter devastation for an avid wildlife photographer.  I grabbed my phone but quickly realized it was turned off and that it takes a long time to turn on.  Thankfully, Jason got a few photos and a short video with his phone.

All I could do was just sit there in amazement and take in the scene.  She came up on shore and rested.  She was so beautiful and unfazed by what she just accomplished.  Slowly coming out of shock by this sighting, we realized that we were almost late for our morning appointment!  As we drove by the moose, she looked up at us as if to say “good morning!”  She was standing on shore in the most perfect morning light with the entirety of Lake Coeur d’Alene in the background.  It would have been an amazing photo, but, well, it wasn’t to be.  It was, though, the perfect moment to reflect on the beauty of nature and the fact that you never know what the day could bring!

“If you could choose one characteristic that would get you through life, choose a sense of humor.”